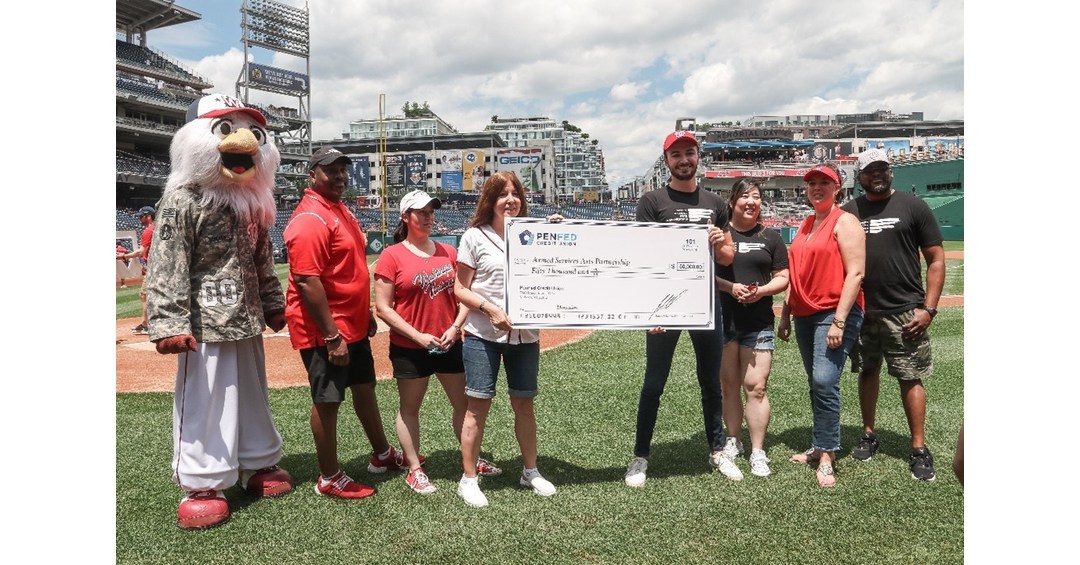 The donation will be used to fund ASAP’s initiatives, including ASAP’s “Combat to Comedy” performance at at Caroline’s on Broadway in New York City on Thursday September 15. The Night of Laughs will feature comic backdrops from ASAP military veteran comics, star comedians and PenFed executives. To date, PenFed has donated more than $200,000 to support the more than 1,800 veterans in the ASAP community.

“We cannot underestimate the healing power of the arts,” Patricola said. “I’m so proud of this partnership and that PenFed can support a community that not only transforms lives through comedy, improv and storytelling, but saves them.”

Graduates of ASAP programs took part in several National Championship game day traditions on the field, including the ceremonial “Play Ball” announcement, the presentation of roster cards, and the holding of the ribbon of the finish line of the race of presidents.

“We are very grateful for PenFed’s deep commitment to the well-being of veterans and military families,” Jenkins said. “This generous contribution will impact the lives of hundreds of veterans, and it’s just part of what PenFed has done to give veterans the opportunity to learn skills, build confidence, and to join a supportive community via ASAP.”

Donations to support the military community through ASAP can be made here.

Founded in 1935, the Pentagon Federal Credit Union (PenFed) is the second largest U.S. federal credit union, serving more than 2.8 million members worldwide with $35 billion in assets. PenFed Credit Union offers certificates, checks, credit cards, personal loans, mortgages, auto loans, student loans, and a wide range of other financial services. Our mission is to empower members of our community to achieve financial well-being. PenFed Credit Union is federally insured by the NCUA and is an equal housing lender. To learn more about PenFed Credit Union, visit PenFed.org, like us on Facebook and follow us @PenFed on Twitter. Interested in working for PenFed? Find us on LinkedIn. We are proud to be an Equal Employment Opportunity Employer.

About the Armed Services Arts Partnership