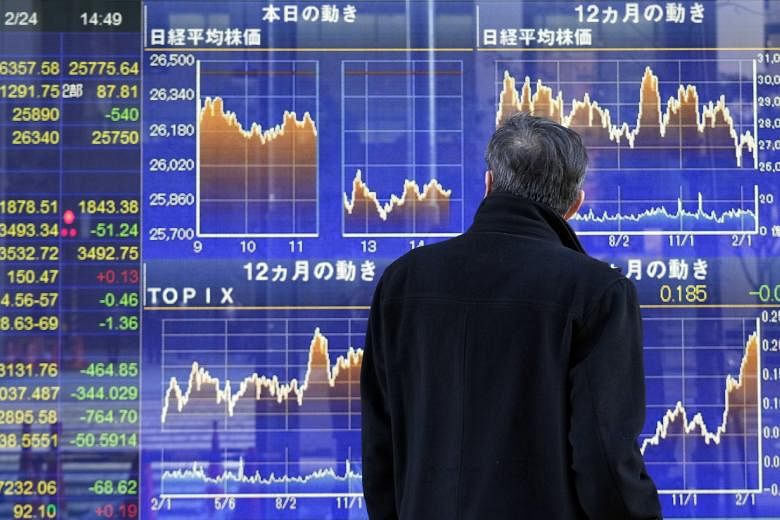 NEW YORK (BLOOMBERG) – Emerging market currencies tumbled and Australian bonds soared as global markets opened in Asia on Monday, Feb. 28, in some of the first signs of the growing financial fallout from the Russia’s assault on Ukraine and the Western response with sanctions.

The Russian ruble will be in focus, along with potential safe-haven currencies such as the US dollar, which rose against the euro, and risk sentiment indicators such as the Australian dollar. The South African and Turkish currencies tumbled early on Monday as emerging market currencies face contagion issues. Australian 10-year bond yields fell five basis points to 2.18%.

Hard-currency bonds from Russia and Ukraine will be closely watched after credit rating cuts by major raters on Friday night, as will a host of global markets ranging from oil and wheat to Treasuries and bank stocks.

The United States and its European allies stepped up their response to the escalating conflict when President Vladimir Putin ordered Russia to advance militarily, announcing plans to sanction the central bank in Moscow and cut various Russian lenders from the system. critical financial messaging service Swift. These are in addition to previous actions against the country’s largest banks and restrictions on national bonds.

Speculation mounted that the Russian currency could suffer another hammering in global institutional markets as Russians rushed to get their hands on greenbacks and BP decided to dump its shares in oil giant Rosneft PJSC .

“We expect Russian bonds and the currency to continue falling,” said Kathy Jones, fixed income strategist at Charles Schwab. “We also expect pressure on the euro due to economic damage that could come from rising energy costs and the potential decline in business activity and consumer confidence.”

Lenders in Russia offered dollar-ruble exchange rates well above the 83 level, where the market closed on Friday. Rates varied widely on Sunday, from 98.08 rubles to the dollar at Alfa Bank to 99.49 at Sberbank PJSC, 105 at VTB Group and 115 at Otkritie Bank at 3:30 p.m. Moscow (8:30 p.m. Singapore time).

Sanctioning Russia’s central bank is likely to have a dramatic effect on the country’s economy and banking system, Ms. Elina Ribakova, deputy chief economist at the Institute of International Finance, said ahead of the announcement of the latest round. of penalties. “This would likely lead to massive bank runs and dollarization, with a sharp sell-off, a drain on reserves – and, eventually, a total collapse of the Russian financial system.”

The decision to hit the central bank is a first for an economy the size of Russia. The United States has already sanctioned the central banks of adversaries such as Iran and Venezuela for funneling money that supported destabilizing activities in their respective regions. North Korea’s central bank is also blacklisted.

Russia saw its sovereign credit rating reduced to the trash on Friday by S&P Global Ratings, which lowered its rating by one notch to BB+. Moody’s Investors Service – which currently places Russia a notch above speculative – said it was reviewing the country for a potential cut.

Ukraine, meanwhile, had its score downgraded by Fitch Ratings to CCC from B, putting it seven notches below investment grade and on par with El Salvador and Ethiopia. Moody’s is also looking at Ukraine.

These moves by the world’s leading credit assessors came after US and European moves to restrict Russia’s access to global debt markets, but before recent developments regarding the central bank and the Swift payment system.

Understanding Your Credit Score: What Makes Up Your FICO Score